the boy who harnessed the wind

by goods4goodPosted In: Africa News, Of Note 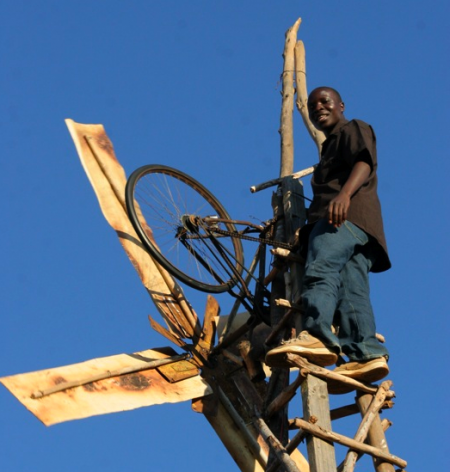 The story of William Kamkwamba, aka The Boy Who Harnessed the Wind, is one of true ingenuity and potential.

From a small village in central Malawi, William was forced to quit school at age 14 because his family could no longer afford his school fees. Fascinated by science, he decided to continue his education by reading at a nearby library. One day he happened to pick up an old textbook with a picture of a windmill on it. “I was very interested when I saw the windmill could make electricity and pump water,” said William. “I thought: That could be a defense against hunger. Maybe I should build one for myself.”

Though his fellow villagers were utterly perplexed when they saw William tinkering with spare bicycle parts, a tractor fan blade, and an old shock absorber for months on end (many thought he was smoking marijuana), their confusion turned to amazement when they witnessed the final product: William’s first functional windmill. The 16ft tall wooden structure was soon powering light bulbs and charging cell phones throughout the village (an amazing feat considering only 2% of Malawians have access to electricity).

Read the full post and visit Goods for Good.