Change.org’s Nathaniel Whittemore reviews The Boy Who Harnessed the Wind

Today Change.org was very kind to put me on the cover of their website. I'm so grateful. The editor of their social entrepreneurship blog Nathaniel Whittemore wrote a thoughtful review of the book. 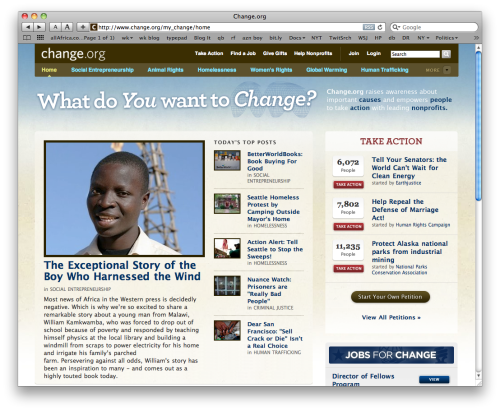 The Exceptional Story of the Boy Who Harnessed the Wind

In the early 21st century, Malawi was gripped by one of the worst famines the nation had ever seen. Around the country, crops fell and subsistence farmers were forced to migrate, wandering in search of work and food. As resources dwindled, more and more families were forced to make the desperate decision to pull their children from school to help at home. One of those students who could no longer afford school was William Kamkwamba. Yet as is so often the case, from the tragedy of the famine came an incredible story of a young person whose persistent creativity and indefatigable spirit led to incredible things. This is the exceptional story of the Boy Who Harnessed the Wind.

The Africa of William Kamkwamba's youth was a place still caught between tradition and modernity. As he put it in the first lines of his wonderful new book "The Boy Who Harnessed the Wind," "Before I discovered the miracle of science, magic ruled the world."

The first part of the story is about his world before that discovery. It's a world in which the characters are the friends he got into trouble with, the towering adults who commanded his understanding of the world, the landscapes that form his playground, back yard, and first school. The early part of the story is notable not just for its evocative depiction of African village life, but because it feels so resonant with the experience of growing up anywhere – particularly for young boys for whom every day is a new exploration and a new adventure. Read full review.